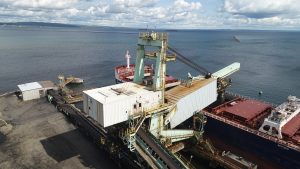 The Port of Thunder Bay is reporting above-average cargo tonnage as of October 31.  Port terminals have handled 6.9 million metric tonnes of cargo so far this season.  This figure is 10% higher than last year and 5% higher than the 5-year average.

Grain volumes held steady in October, maintaining a seasonal increase over last year mostly due to higher canola shipments to international ports.  At just under half a million metric tonnes, direct exports of canola from Thunder Bay by foreign-flagged saltie vessels are at an all-time high.  The bulk of the canola exported from Thunder Bay is grown in Manitoba.

The first week of November has remained busy, particularly for salties departing the Port with grain. Agriculture and Agri-Food Canada has been projecting a strong fall harvest, however there is some uncertainty for the final two months of the shipping season as poor weather has led to harvesting delays and some crop downgrading on the Prairies.